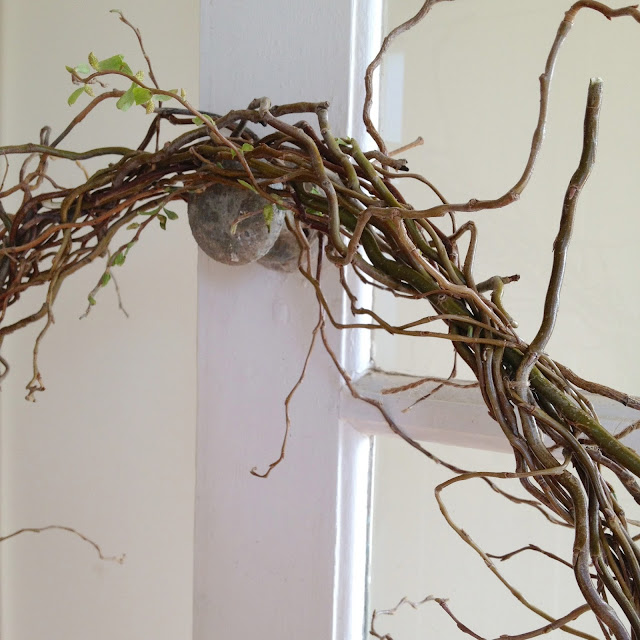 Its been so long since I posted random happenings around here.  I've found it difficult to sit and write my blog, even though there is a post being written in my head just about every night as I lie in bed. There's loads to say, and nothing all at the same time.  I'm hoping I find my groove again soon, I miss it.

Last weekend my parents came to stay, we celebrated fathers day with 2 of my 4 brothers.  For one, it was extra special because this was his first fathers day.  We welcomed my new nephew, Tex, to the family 3 weeks ago and he is divine. Dad came equipped with his chainsaw ready to work as always. Sadly, we had to cut down the big old willow out the front of our place.  A climbing favourite that was no longer safe. I've had people coming to collect trailer loads of branches to make use of, and I saved just a few for a simple wreath. 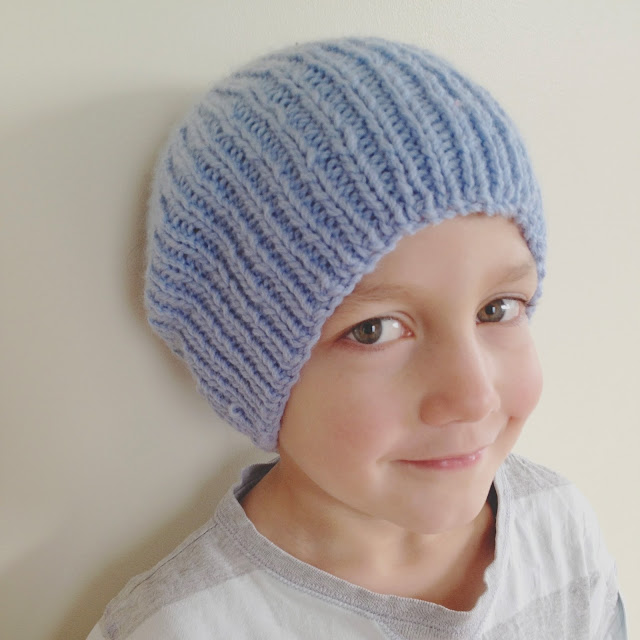 This little guy has had me in awe of his bravery and composure.  The mother of the year award will not be coming my way any time soon.  He was desperately in need of a haircut.  I clipper it myself, always, but I haven't made the time in months.  So amongst the after school madness last week, I decided it was time.  In my haste I started, straight up the middle of his head without the measure guard on. Yes, I did.

I couldn't believe what I had done, and while trying very hard to keep calm, the middle guy comes out and screeches "What are you doing!! Are you making him bald!!", at which point this little guy totally, and understandably, flips out, while I try to fix the hideous mess.  It was traumatising for all of us.  A hair appointment was made and the best that could be done was done.  A hat has been worn ever since and most likely will be for another week at least.  We might find it a funny story in time. 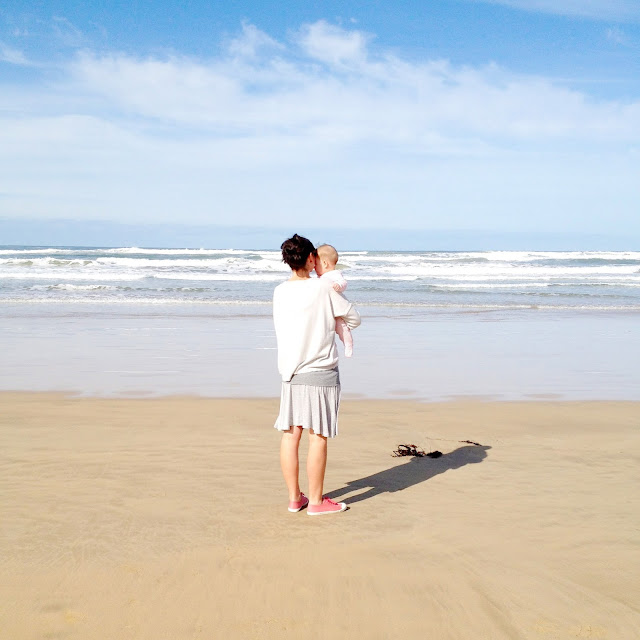 Spring arrived and the warmth in the air has been so energising.  I woke yesterday with sunshine streaming through the window and I couldn't get out of bed quick enough.  I hurried everyone out of the house and we walked to the beach to soak it in.

I was desperate to be out, feeling the sun on my skin, the crisp, fresh ocean air on my face.  The waves were amazing.  Loud and constant.  We could hear them roar way before we could see them, it was a perfect morning to be there. 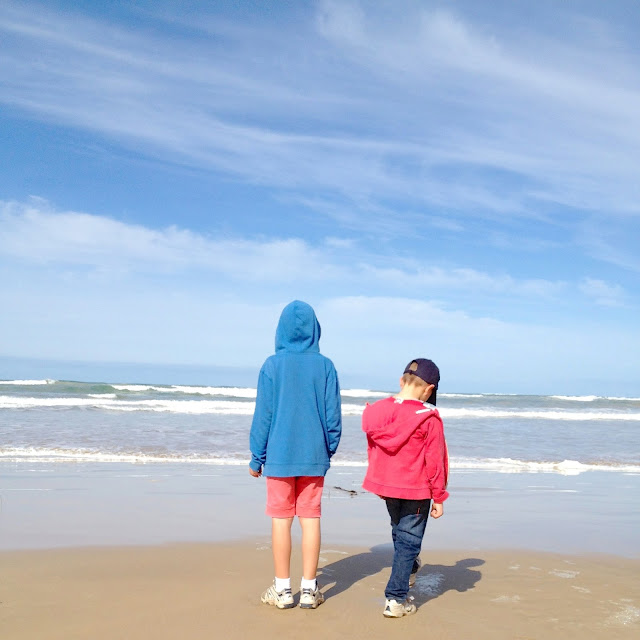 These two wander and chat, and I noticed how much the middle guy has grown in the last couple of months. They are such good mates. They bicker of course, but they're the first at each others side when one of them is hurt or feeling sad. 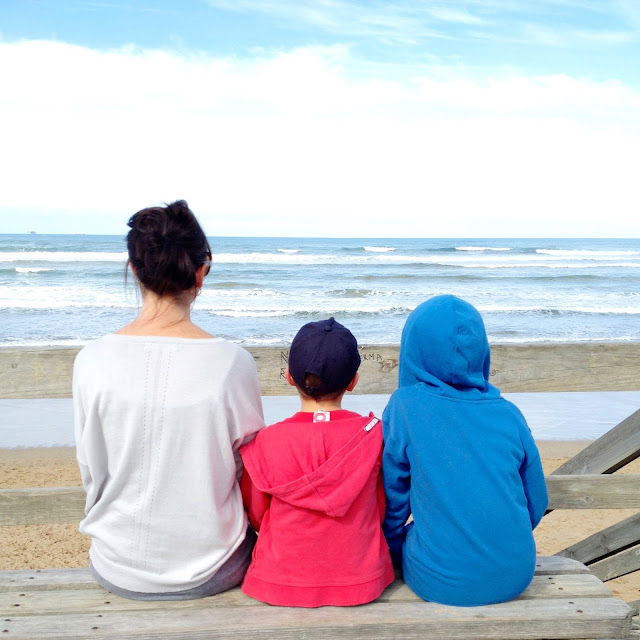 We sat to watch the big cargo ships, imagining what it would be like to be so far out at sea.  We watched the people out running and walking their dogs, and a man doing some kind of tai chi and meditation and I wanted to join him. 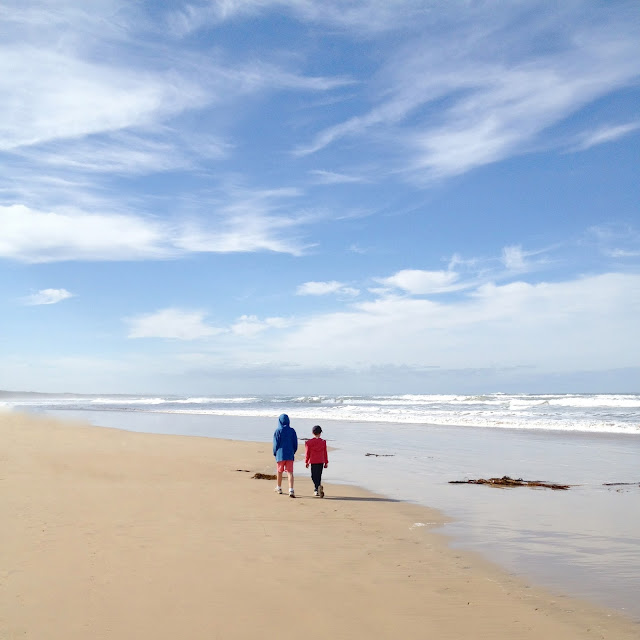 The big boy climbed sand dunes and took some pictures for me in between.  He announced recently that he doesn't want to have his picture blogged or instagramed any more.  Sad but true, so be it.

We're more than halfway through the year already and I can't quite believe he will be at high school next year. He's excited and nervous all at once.  Suddenly there seems to be loads of stories flying around about what goes on at high school, and he's beginning to feel very anxious.  Times have been challenging to say the least, a post I've written that one day I might be brave enough to share.  We really need his secondary school experience to kick off in the most positive way. 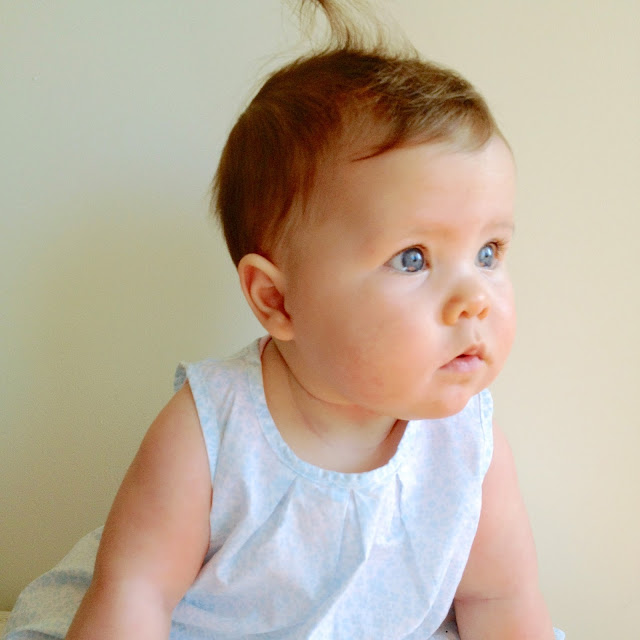 This little girl is the light of his life, and I suddenly realise why we have been blessed with her.