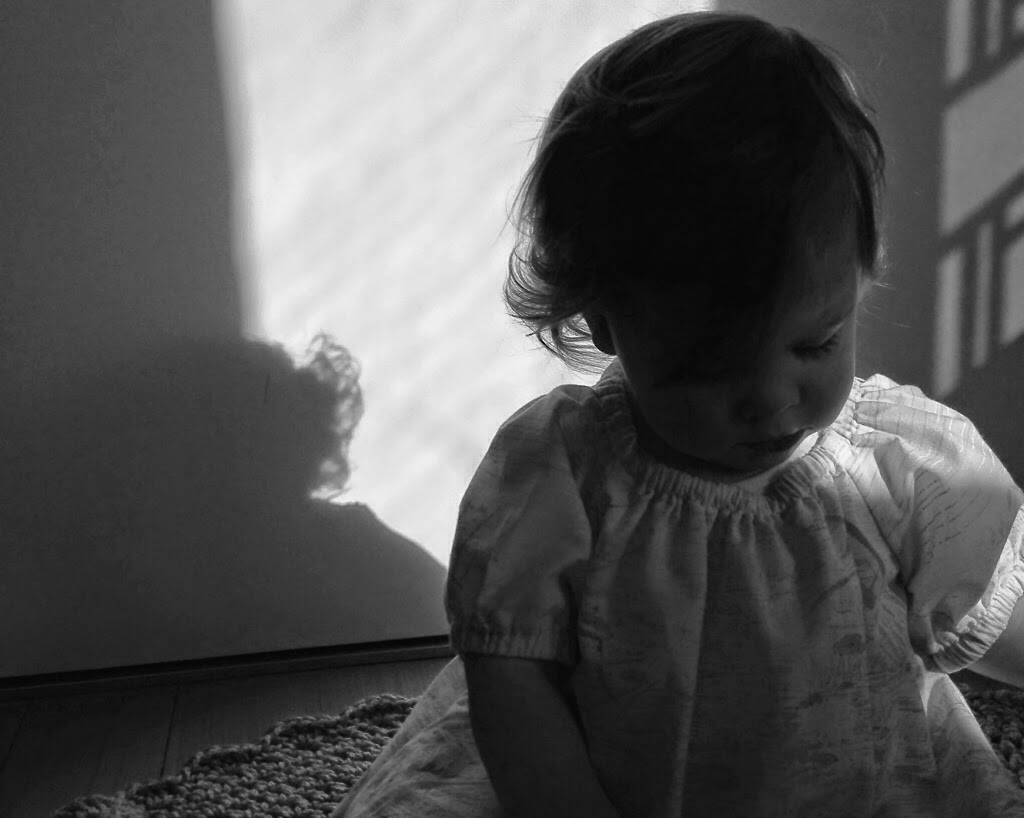 It's taken me eighteen months to get around to writing this, but the words were not there before now.  Now, as our breastfeeding story is coming to an end and I'm feeling nostalgic and a little bit emotional.  I fed her the longest out of all of my babies, and I've loved every single moment.  I'm going to miss her chubby hands caressing my skin as she goes into her milk zone daze, she takes me with her and it is so peaceful and beautiful, that place that only she and I share. Yes, I will miss it a lot.

Her story is different from the others, it was the only time I'd ever had to be induced.  It was frightening, unfamiliar and unknown, but it had to happen this way because I discovered in my eighth month that I had a condition called Cholestasis.

I'd never heard of this before, and coincidentally, I'm finding it pop up on medical and pregnancy sites so often of late.  It seems to be a lot more common than I thought, yet nobody really knows about it. Cholestasis is a liver condition that can be caused due to an abundance of pregnancy hormones which hinder the breakdown of bile salts, forcing them to build up in your blood and reducing the flow of oxygen through the body.  It was in my eighth month that I had a couple of episodes of nausea which I hadn't experienced since the first trimester, and never at this stage in previous pregnancies.  I began to feel an increase in the severity of my everyday itchiness, but I didn't think much of it, putting it down to the usual stretching skin and fluid retention.  But then, the itching became so intense on the palms of my hands and my feet that I struggled to find relief, feeling drawn to the cool roughness of our garden stones and the course sand in the ocean. I'd twist and turn, burying my feet as far as they could go.  It became constant and it was then that Nick forced me to check it out with our doctor.

Everything changed from that moment.  He ordered me to have a blood test immediately.  He was cool, calm and reassuring, but there was an urgency in his tone and I knew it was serious. You see Cholestasis can be fatal, the bile acids and/or lack of oxygen flowing through the blood to the placenta can cause stillbirth.

I was lucky and, to this day, with all that went on in the early days of the pregnancy (you can read about that here),  I believe wholeheartedly that this doctor was sent to us by greater powers.  He had sadly and tragically experienced the unthinkable outcome of this condition with a patient early in his career and was so switched on to its symptoms.  He told me the story afterwards. We'll be forever grateful to him for managing us so well.

So with three weeks to go before our due date, my doctor, our hero, arranged for me to be induced. The timing could not have been more inconvenient, but we were certainly not going to argue.  I was to be induced the day before the first day of the school year.  Mother guilt and fretting began to take hold, not to mention that we were only a month into running our own business which in that very week was still to this day the busiest week we've ever had! Needless to say, stress levels and blood pressure were climbing. 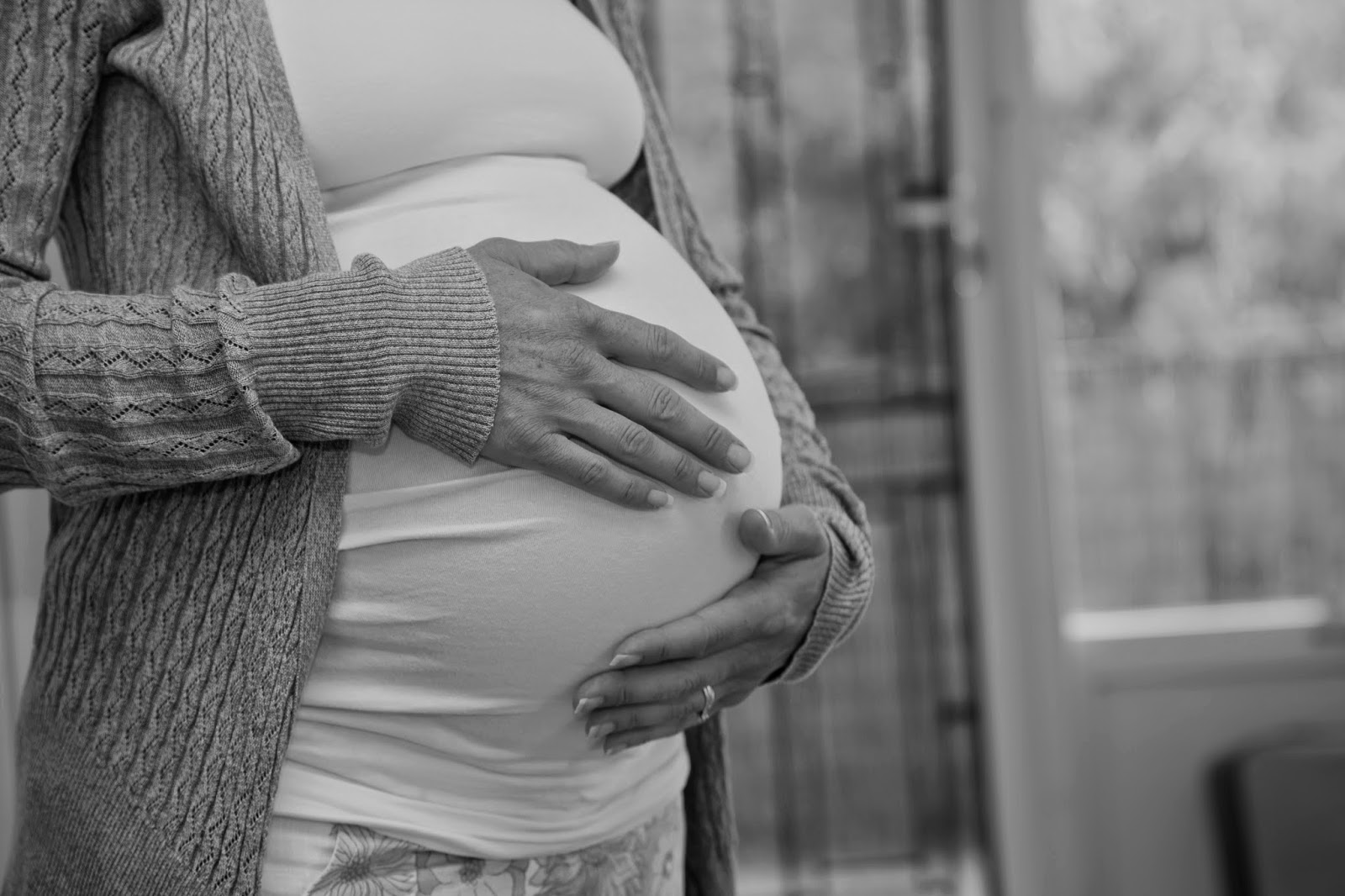 I found myself mentally and emotionally shutting out everything that wasn't within my immediate control.  Mum had come to stay and was going to manage the boys and their first days of school, I had to let Nick do whatever he had to do to manage the business, and I had to concentrate solely on birthing this baby.

I kissed my boys goodbye, told them I loved them and would be thinking of them on their first day of school.  They were wonderful.  Soldiering on amongst, what seemed to me, total chaos.  Yet, it all seemed so...structured.  Checking into the hospital felt strange, every other time labour had been in full swing.   We went straight in for our scheduled CTG, with my doctor coming in soon after to administer the prostoglandin.  We were pretty certain this would bring everything on fairly quickly considering it was my fourth time around.  I truly thought we'd have our baby in our arms within a few short hours.  I was taken to the pre-labour ward to wait for things to begin.  We waited and waited, Nick took work calls and co-ordinated jobs.  Afternoon became night time and I realised this could take a lot longer than I imagined.  Nick went home to be with the boys to try to keep things as normal as possible, I tried to settle in and to get some rest but it was quite impossible with all that goes on in hospitals. Sirens, p.a announcements, hysterical patients and all the visitors to the lady next to me, so many visitors, she hadn't even had the baby yet!

By the early hours of the morning, with no sign of labour, I was beginning to feel really annoyed.  I was annoyed because the night before I went to bed early and had such a good night sleep, I'd spent the day being calm and preparing my mind. I felt strong and ready.  Now, here I was exhausted and sleep deprived and feeling far from strong!

At 5am, I was moved into the birth suite where I would wait for my doctor to arrive and break my waters.  I sat up to a cup of tea and toast,  and all I could think about was that I should have been at home with my boys taking their first day photos and seeing them into their new grades.

Nick soon arrived, half expecting a baby on my chest, or at least for me to be bent over heaving with contractions.  A bit of a let down, but all the more time to keep organising work and the jobs were pouring in!  The doctor came to assess me and then broke my waters.  Now I was sure we were about to have a baby.  I was hooked up to a mobile CTG so the baby's heartbeat was under constant supervision.  The hours ticked by, I walked laps of the room strapped in wires, dragging this machine around with me.  I went through almost my entire supply of carefully packed hospital underwear before I decided that it was just more practical to wear a towel. We paced, I ate. Nick ran out to do a shoot and returned, still nothing.  Not even the slightest cramp.

By 5pm, more than 24 hours since we arrived, this baby was not even close to coming out.  In walks my doctor, once again all cool and calm, but just like before I could sense his urgency around getting this baby out and safely into my arms.  The next step was the Oxytocin IV, and if that didn't work it was to be an emergency cesarian.  The idea of all of this felt so foreign and so unnatural after 3 natural drug free births.  It was difficult to accept, but we would do anything to ensure this baby was born safe and healthy.

They started with low doses of the oxytocin, increasing it every half hour before contractions finally began.  Finally!! This was good.  I was exhausted from lack of sleep and all the waiting, but I was willing the pain, I wanted to feel it, I needed to feel it and to know this baby was on its way.  For the first time, I was restricted to the bed. Not being able to move around to distract from the intensity of the pain took such focus and control.  I don't know where that comes from. Somewhere deep within. It's a strength that we have, us mothers, its incredibly primal and raw and it is there when we need it the most.

I would breathe through the contractions, everything around me disappearing into a fog, conversations between Nick and the midwife soft muffled sound in the distance.  The midwife was amazing, as they are.  She was so in tune with what I needed and sensed very quickly that I didn't require back rubs, encouragement or comforting, she could see I was in another place.  Then the contraction would ease and she'd be right there, back on deck and ready to monitor the wires and my pillows.

Nick always knows when its about to happen.  He spends the whole time checking in, asking what I need but knowing I don't want anything, I'm in my birthing zone.  It's when I take hold of his hand that he knows.  This is when the pain becomes almost more than I can bare.  This is it, and he braces himself to be my strength, and to watch this baby come into the world.  This is it.

It's the best part, that last push.  The hardest, but the best.  And then you feel her little body slide, literally slide, right out all wet and wavey-like, there is nothing like that feeling, its so hard to describe. 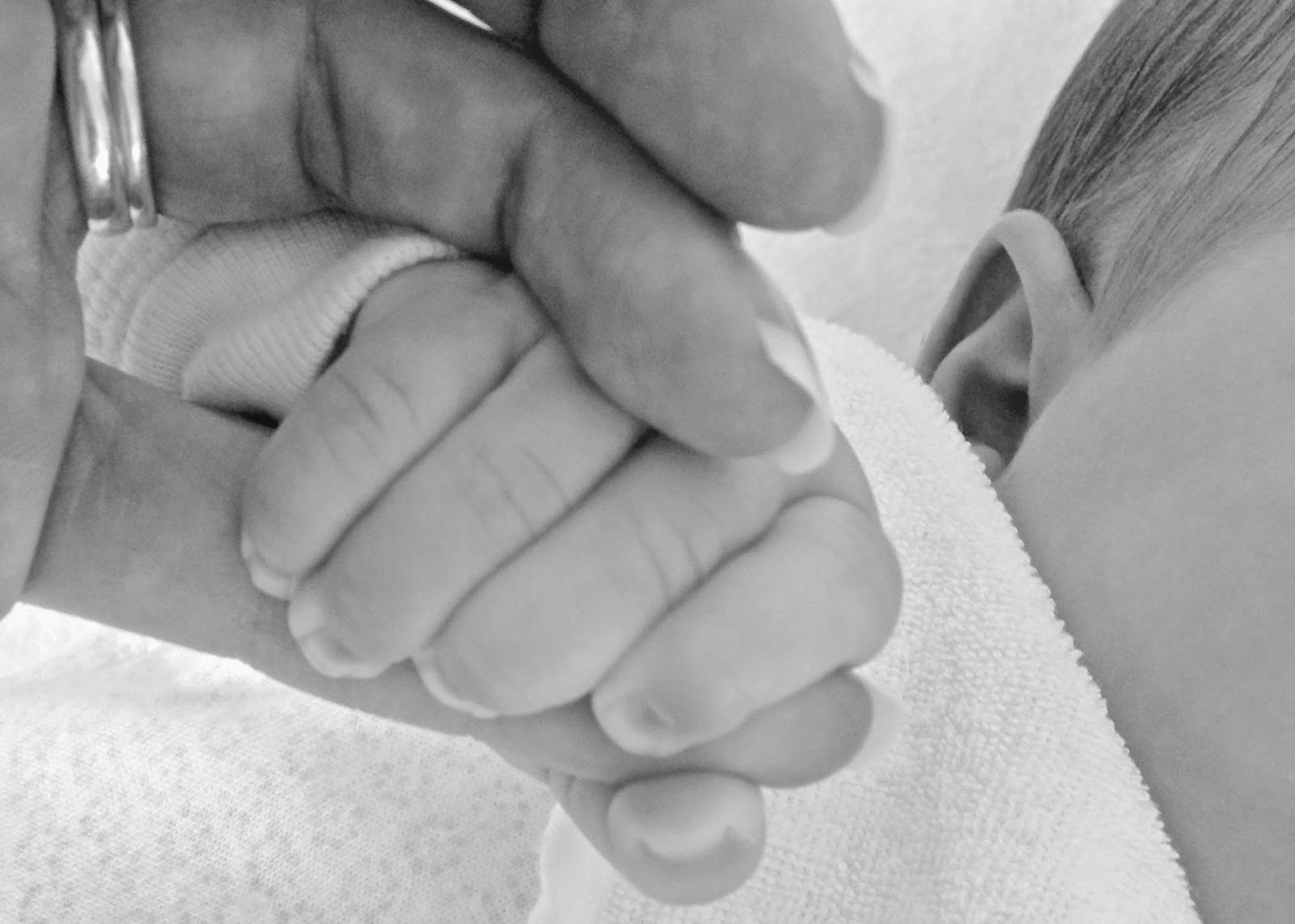 Now relief and exhaustion and elation.
Suddenly there are lots of people around and I don't know where they came from. With my body trembling, they lift her up and put her on my chest and she is so beautiful.  This tiny, tiny divine little being, all warm and sticky and purplish and perfect, and she's crying the daintiest little cry.

My doctor arrived then.  He just missed it. After all the waiting, labour itself was very quick.  I looked at him and thanked him through my tears, and I could see the relief on his face too.  For all of his professionalism and smoothness, I could see that he was as nervous as we were about this baby's safe arrival.  Thank goodness for him, our gratitude is overwhelming. 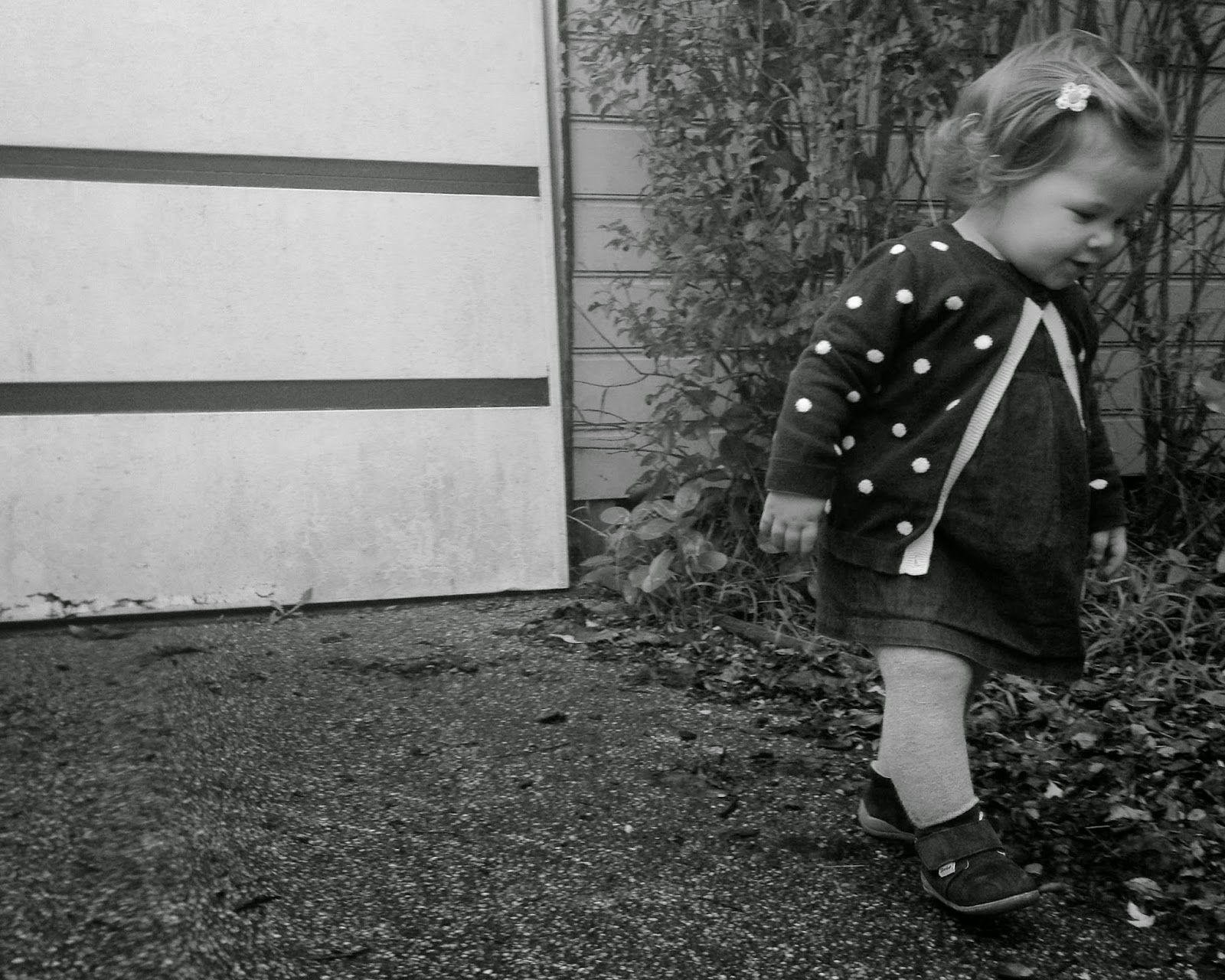 And now here she is, in all her chunky sweetness.  This little shining light to complete our family of six.  Blessed.