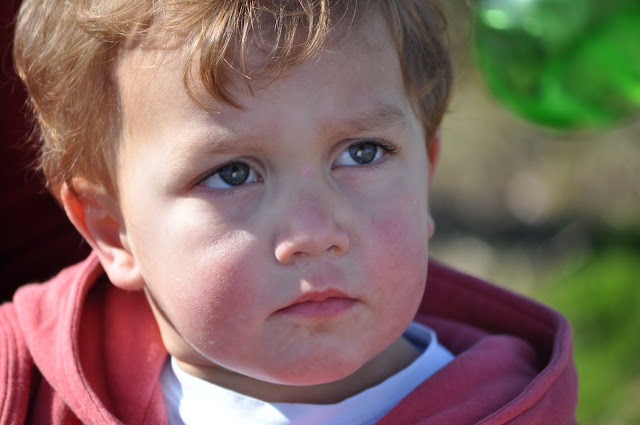 They happen in the morning, the afternoon, the middle of the night, there really are no limits as to when, where or how long they last - 3 year old tantrums are just part of our every day life!  Whether we're at home or out & about, they come pretty thick and fast.  In fact, it's kind of like living with this little walking, talking time bomb that could just explode at any moment without warning!  It doesn't matter where we are, my coping techniques are always the same, I don't give in, there are always consequences for him, I try with every ounce of my being not to get upset.  I stay calm (at least it appears this way on the outside, if the inside were visible I think I'd be committed) and I pretty much wait for it to be over.  At home he'll go on the 'naughty mat' until he's ready to stop screaming like some crazed feral cat, always telling him I'll be there when he is ready to be nice & have a cuddle.  When we're out, say in a cafe, I'll take him outside and tell him he won't be coming in until he's ready to be nice.
All of this usually works well and fairly quickly, until today when we were out for a nice day in town, to have treats, spend Christmas vouchers, & basically hop from one toy shop to the next.  He wanted to go on the Wiggles ride, you know the ones, they are everywhere you look & make life a flipping nightmare at the best of times, so anyway, I explained that after we'd been into a shop where the other two were planning some very exciting purchases, we'd come back & have a ride.  Of course this was totally unacceptable in his 3yr old mind & so began the loudest, longest most disturbing & offensive tantrum every known!  It continued all through the store, through the checkout, through the shopping centre, down two escalators, through to the car park, in the car & home.
Needless to say we didn't get around to doing most of the things we'd planned, but I was determined not to let the other two miss out on making their purchases that had been long planned & looked forward to.  He, on the other hand got nothing, in fact lost a few of his favourite things which he can earn back with good behaviour.  What is most extraordinary & embarrassing is the way people look at you or feel they are entitled to make a comment or a judgement about your out of control child or parenting skills! While others look at you with that look that says 'You poor woman, I know just how you feel' or 'I am so glad to see this happen to someone else & not just me' - you know, a little solidarity!
Fortunately, he is as adorable as he is horrid, and I take great comfort in that...
Posted by mel @ loved handmade at 2:38 PM